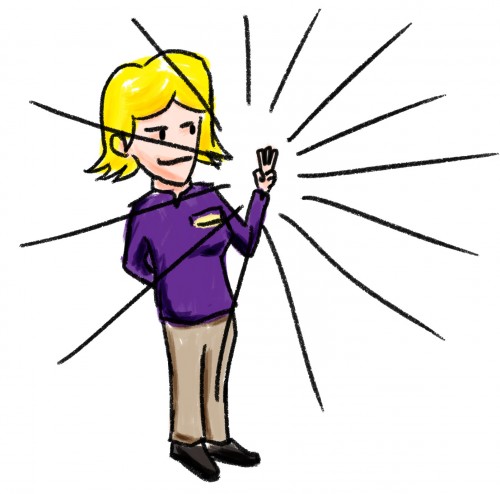 I am posting this as a MBA Mondays post. But I did not learn this little lesson at business school. I learned it from a very experienced venture capitalist early in my post-MBA career.

I was working on a CEO search for one of our struggling portfolio comapnies. We had a bunch of them. I started in the venture capital business just as the PC hardware bubble of the early 80s was busting. Our portfolio was a mess. It was a great time to enter the business. I cleaned up messes for my first few years. I learned a lot.

Anyway back to the CEO search. One of the board members was a very experienced VC who had been in the business around 25 years by then. I asked him “what exactly does a CEO do?”

He answered without thinking:

A CEO does only three things. Sets the overall vision and strategy of the company and communicates it to all stakeholders. Recruits, hires, and retains the very best talent for the company. Makes sure there is always enough cash in the bank.

He replied that the CEO should delegate all other tasks to his or her team.

I’ve thought about that advice so often over the years. I evaluate CEOs on these three metrics all the time. I’ve learned that great CEOs can and often will do a lot more than these three things. And that is OK.

But I have also learned that if you cannot do these three things well, you will not be a great CEO.

It is almost 25 years since I got this advice. And now I am passing it on. It has served me very well over the years.

JLM expanded on what Fred wrote:

Obviously having been a CEO for over 30 years, I have had ample time to think about what it takes to be a “good” CEO.

The CEO has to be a leader in the context of leaders being folks who get organizations to places they would never get by themselves. He has to want to be a leader. He has to be comfortable being a leader — or able to deal with the attendant discomfort gracefully. He has to be able to say — “I am responsible for EVERYTHING that happens or fails to happen at this company.” And then make it so and believable and live it.Let’s not bullshit each other — the most important characteristic of any CEO is to be a moneymaker. It is not particularly dignified to say it that bluntly but you can sugar coat whatever you want and it all comes down to “can you ring the bell.”

The CEO has to set the tone of everything — big and small by the values he projects, by the way he conducts himself and by the he deals with everyone and everything. The CEO has to go to the trouble to formulate these values in a concrete way. I have a little booklet which I have developed over 30 years which quantifies the values I am looking for and I personally give it to every new employee their first day of employment.

The CEO has to set a vision for the company. Commit it to writing. Argue for its attainability — even when it is seemingly nuts. This is the FIRST sale that any company has to make. It has to sell the idea for its own existence.

The CEO has to be a good thinker, a better writer and a powerful communicator. When a CEO gets done communicating — you have to believe you really could bite the ass off a bear. Guess what, you could!

The CEO has to tranform the idealistic vision into bite sized specific objectives which are SMART — specific, measurable, attainable, realistic and temporal. How do you eat an elephant? ONe bit at a time — the CEO has to hack off the first bites for the rest of the executive staff.

The CEO has to organize the functions of the company to provide a logical way of accomplishing the vision both through the objectives noted above but also by talking folks through their respective duties. By coaching his subordinates to execute at a high level of competence and excellence even — especially — when the fledling efforts are terrible. This is particularly true in new companies.

The CEO has to be a trainer able to train folks — different than coaching which is primarily mental — to discharge their duties. When you hire good experienced folks then all the CEO has to do is document what is going to be done rather than training them as to what to do.

The CEO has to be a disciplinarian and has to invoke accountability within the organization — not a raised voice stinging kind of discipline but rather a “you have to eat your vegetables” kind of discipline that says not only is this a good way to do things, you have to do it this way because we are in a competition to win. Discipline means — in it, to win it.

The CEO has to recruit, inspire and drive talent to levels of personal and team performance that exceed the expectations of the practitioners themselves. He has to remember that there are cycles of energy and that you have to find the right time to make things come together particularly when dealing with a team and team building. You do not produce Rangers in a long weekend and a company offsite is not going to transform your company from good to great. You have to be patient and painstaking. You have to be wiley and canny and sly.

The CEO has to be able to reduce what the company does to logical processes (SOx 404 type process thinking) that can be documented, understood, streamlined, lubricated and improved. But you have to start w/ identifying and documenting the most important processes.

The CEO has to force the company to be “customer centric” and focused completely on from whence the cash flows. You cannot tolerate a single disparaging comment about the customers.

Most importantly — the CEO has to face down risk with a steady gaze which inspires confidence amongst the executive team. “Well, if he isn’t scared, then I guess I shouldn’t be scared.”

This article was originally written by Fred Wilson on August 30, 2010 here.