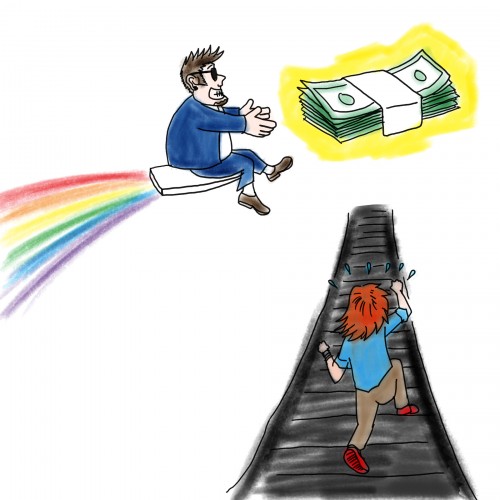 We’re five posts into this MBA Mondays series on Employee Equity and now we are going to start getting into details. We’ve laid out the basics but we are not nearly done. I am just starting to realize how complicated the issues around employee equity are. That’s not good. It’s like paying taxes. Everybody does it and nobody but the tax accountants understand it. Ugh.

Anyway, enough of that. Let’s get into the issue of liquidation overhang.

When VC investors (and sometimes angels) invest in a startup company, they almost always buy preferred stock. In most startups, there are two classes of stock, common and preferred. The founders, employees, advisors, and sometimes the angels will typically own common stock. The investors will typically own preferred stock. The easiest way to think about this is the “sweat equity” will mostly be common and the “cash equity” will mostly be preferred.

First, a quick bit on why preferred stock exists. Lets say you start a company, bootstrap it for a year, and then raise $1mm for 10% of the company from a VC. And let’s say a few months later, you are offered $8mm for the company. You decide to take the offer. If the VC bought common, he or she gets $800k back on an investment of $1mm. They lose $200k while you make $7.2mm. But if the VC buys preferred, he or she gets the option of taking their money back or the 10%. In that instance, they will take their money back and get $1mm and you will get $7mm.

In its simplest (and best) form, preferred stock is simply the option to get your negotiated ownership or your investment back, whichever is more. It is designed to protect minority investors who put up significant amounts of cash from being at the whim of the owner who controls the company and cap table.

Let’s keep going on the $50mm example. It comes time to sell the company. The VCs own 75% of the Company for their $50mm. The founders own 10%. And the employees own 15%. A sale offer comes and it is for $55mm. The employees do the math and multiply 15% times $55mm and figure they are in for a $8mm payday. They start planning a party.

But that’s not how the math works. The VCs are going to choose to take their money back in this situation because 75% of $55mm is roughly $41mm, less than their cash invested of $50mm. So the remaining $5mm is going to get split between the founders and employees. The investors are now “out of the cap table” so the final $5mm gets split between the founders and the employees in proportion to their ownership. The employees get 60% of the remaining $5mm, or $3mm. The party is cancelled.

This story is even worse if the company that has $50mm of investment is sold for $30mm, or $40mm, or even $50mm. In those scenarios, the employee’s equity is worthless.

I know this is complicated. So let’s go back to the basics. If your company has a lot of “liquidation preference” built up over the years, and if you think it is not worth that amount in a sale situation, your company is in a liquidation overhang situation and your employee equity is not worth anything at this very moment.

You can grow out of a liqudation overhang situation. If this hypothetical company we are talking about decided not to sell for $55mm and instead grew for a few more years and ends up getting sold for $100mm, then the liquidation overhang will clear (at at sale price of $65mm) and the employees will get $15mm in the sale for $100mm.

So being in a liquidation overhang situation doesn’t mean you are screwed. It just means your equity isn’t worth anything right now and the value of the company has to grow in order for your equity to be worthwhile. But it also means that a sale of the company during the liquidation overhang period will not be good for the employees. As JLM would say “you won’t be going to the pay window.”

This issue is front and center in the minds of many employees who worked in tech companies in the late 90s and early part of the 2000s. The vast majority of companies built during that period raised too much money too early and built up large liquidation preferences. Many of them were sold for less than the liquidation preference and the investors lost money on their investments and the employees got nothing. That has hurt the value of employee equity in the minds of many.

We are in a different place in the tech startup world these days. Many of our companies have raised less than $10mm in total investment capital. And the ones that have raised a lot more, like Zynga, Twitter, and Etsy, have enterprise values that are 10x the lquidation preferences (or more). This is the gift of web economics. It doesn’t take as much investment capital to build a web company anymore. That has made investing in web companies better. And it has made being an employee equity holder in web companies better.

Just because there is a liquidation overhang doesn’t mean you shouldn’t take the job. But it’s a data point and an important one in valuing the equity you are being offfered. Figure this stuff out going into the job. Because standing at the pay window and finding out there’s no check for you is painful. Don’t let that happen to you if you can help it.

Fred – one of the things I suggest all of my companies do is periodically calculate the “liquidation waterfall” across all classes of shareholders. When they “follow the waterfall”, employees get a very clear sense of the impact of the liquidation overhang in black and white. It’s amazing how few CEOs and CFOs do this as a natural course of business.

This article was originally written by Fred Wilson on October 25, 2010 here.