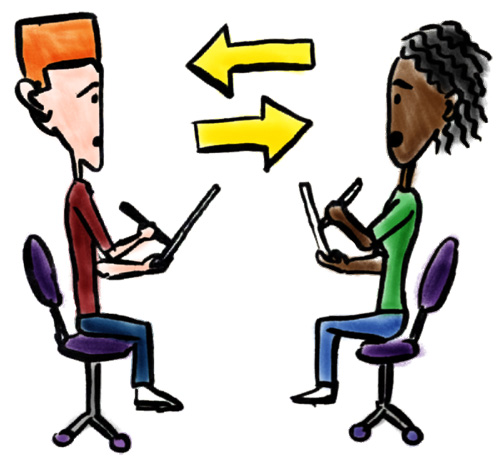 I’m a fan of 360 reviews for companies of all shapes and sizes. I was talking to the CEO of one of our portfolio companies yesterday about his company and he said “we have about 50 employees. is it time to do 360s?” I told him that he was well past the point where he should start them. He asked for some suggestions for web software to use. I gave him a couple suggestions, but I’d love to get more suggestions in the comments.

My partner Albert wrote a post last week about assessing CEO performance and I left a comment suggesting that a regular 360 review process is the best way to do that. In the case of the CEO, the review should be shared, and ideally presented, with at least a subset of the board in person.

For senior management team members, the CEO should be with the senior manager when the results of the review are presented. That gives the CEO the opportunity to discuss the findings and provide guidance, coaching, development goals, and more.

And the senior managers should do the same with the members of their team.

I’ve seen compaies use management coaches to run these processes and I think that is a great idea if you have a mangement coach you like to work with. A strong HR team can also do this for most companies.

I think companies as small as 10 employees can benefit from 360 reviews and I strongly recommend them to our portfolio companies. When I see a CEO or a management team resist the idea of 360 reviews, it can be a red flag to me. I like to think that everyone can and should get feedback on their performance, be open to it, and that they will certainly benefit from it.

So…funny story — the aha moment when I put my finger on the essence of Honestly Now was precisely a 360 degree survey.

The previous day, someone I’d worked with had sent me a 360 survey she was doing as a requirement from an Executive Ed program. And there had been issues and there were things that she needed to know but there really wasn’t room in the analog working relationship to say them. It had been weighing on me. And I was relieved to have had the opportunity, for both our sakes.

Then the next day someone asked me a personal question — related to a procedure she was considering. It could have been any personal question, really — and I thought, DAMN, I really wish she could just ask me via a 360 survey. Because I want her to know, but I really don’t have time/emotional energy to break it to her directly. And I thought about how there’s really only a very, very small number of people in your life who can tell you the truth to your face (such as our parents).

I know for sure it’s the case for women; but I do think for men too (though they may admit it less).

So, yeah, 360 surveys are scary but have great power to transform.

As such, I happen to believe they can be an awesome marketing platform for the people who can help us get from Point A, to Point B.

In that moment, when you hear the news — you are very open to actionable advice on how to make yourself better.

One really interesting use case which had an impact on my came from AmEx. I don’t know if they still have it, but they used to have a really rich feedback process.

It was semi-annual, so the 6-month was non-permanent, a mid-year check, while the year-end is what counted for comp, promotions, etc.

But in addition to the required half-year checkpoint — which everyone tool seriously but it didn’t count, giving people time to course correct — was that they did a lot of training around HOW to give good feedback. It must be timely, actionable etc. And then, each recipient would evaluate the quality of the feedback (not ‘was it true’, but is this timely, actionable, etc.) And also superiors would evaluate the feedback you gave to your team. So lots of “feedback on the feedback”.

It had the effect of stripping emotion, getting to the facts and was the foundation of a learning culture that walked the talk.

I write this sounding like I actually worked there. In fact I only had a bunch of friends there….but they talked about it so much, it left an impression on me!

This article was originally written by Fred Wilson on April 7, 2011 here.