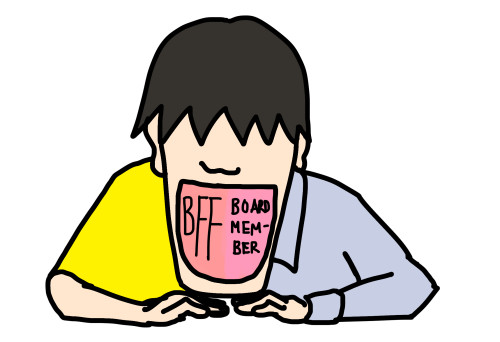 I am developing a standard format for these MBA Mondays series. I do five or six posts on a topic and then I solicit four or five guest posts to wrap it up. Today we begin the guest posts on the Board Of Directors series we’ve been doing for the past six weeks.

One of the most sought after independent directors in the world of internet startups is Scott Kurnit who has started a couple internet companies and has sat on eight boards including several public boards. If you are not familiar with Scott, here is an interview he did with me in late 2010 at the Paley Center.

Fred has done his usual fabulous job outlining the critical issues with Boards. Today I’m going to address two concepts that surprise people every time, end up generating lots of head nods, then usually don’t happen. These suggestions clearly fit into the art of the board more than the science. And it’s the unwillingness to depart from traditional norms by those around the table that stop them from happening.

Why would you take a valuable Board seat for your best friend? Doesn’t every seat need to be occupied by people with industry expertise, financial acumen or years of board experience? That’s logical, but what about having someone who you trust with your life? Someone you’ll truly believe when the Board is telling you that you’re not performing or that the financing you seek is wrong or that you’re spending too much or your request for stock options is too aggressive?

Ideally, your best friend has industry or financial or board expertise – but even if not, having someone who has your back… who tells you the unvarnished truth… that you believe in an instant… is in everyone’s interest. This seat is critical. Fill it.

As a repeat CEO and board member, I try to fill this role of CEO pal if a CEO doesn’t have one. I’m well aware of my fiduciary responsibilities to shareholders, but I try to think of the CEO first since if he performs, the company performs and changing out CEOs is a wrenching and often disastrous activity. A CEO should have someone he can tell anything. That makes a better company and a better outcome for shareholders.

Now, for my second point which will certainly raise the hackles of co-founders who are on the board, work their butts off and may have as much stock in the company as you do: The fact is, there’s only one CEO, one leader. And that’s why people who work for the CEO can’t also be the CEO’s boss. Yes, fundamentally, that’s what Boards are… the CEO’s boss.

Here’s the simple logic. The CEO can’t be in charge 29 days out of the month and then report to her subordinates on the 30th day. That screws up the crispness and clarity for the 29 days. A CEO should not be giving compensation or making non-objective decisions concerning subordinates, in order to make sure her own comp and Board decisions get approved on day 30. Ridiculous. You often end up with a horrible combination of dysfunctional board member and insubordinate… subordinate – all wrapped up in one person. You can’t be both a worker and a boss at the same time. Sorry, co-founders… you can observe at Board meetings… but you don’t get a vote. Period. And when the CEO tells you to leave the Board room… well, she’s the boss.

Since I have this awesome space courtesy of Fred, I could go into why Board members should have no ego, need to come to every board meeting in person, need to give performance reviews to CEOs, should only do email during Board meetings within a designated 5 minute block every hour and create an environment where everyone knows everything with total transparency. But, I won’t abuse the privilege of this space or your time.

Just get a pal on the board and keep your pals who work for you off the board. I promise, your company will be better and return higher rewards for all concerned.

JLM questioned the logic of the “BFF” board member:

I agree with the underlying BFF logic but I see it being implemented in a different manner.

I have constantly preached on this blog the necessity of having a “gray haired eminence” on each and every Board.  Let me tell you why.

Frankly, I think that VCs should find such people — calm, seasoned, knowledgeable, clever, guileful — who are capable of forging a relationship that is like that of a QB and a really good former QB who is now a coach.

This is the “art of the VC” to find and nurture these kind of relationships to multiple the VC’s influence.  And then inject them into the right situation smoothly and without fanfare.

Think about Fred Wilson and Jerry Colonna.  I want Fred for my partner and Jerry for my confidant.

This guy’s job is to coax a great performance out of the CEO.  Not to criticize — nothing wrong w/ that BTW — but to reason together.  In a Socratic manner.

The gray haired eminence spends a lot of talking WITH the CEO and saying — well, what’s going through your mind about the xxxxxx issue?  He initiates the right conversations but he does not dictate solutions even when he knows the solution.

He keeps the conversation on track, all ways always.  In a gentle manner, like running a spy.

He brings that discussion around to the universe of possible solutions, maybe suggests one or two and then lets the CEO bring it in like docking a small boat in a tight slip in a high wind.

Incrementally, slowly and at each step building the CEOs confidence in his own reasoning and problem solving abilities.

Every CEO needs a champion — not some guy to have a pizza and a beer with, again, nothing wrong with that — whose opinion he respects and who will spend the TIME to do the job right.

In the final analysis, the investment of TIIME will determine the outcomes.

The problem with having it be your BFF is that if you are 26 years old, you are getting the life experience of another 26 year old.  You are not getting wisdom, experience and guile.

CEOs are worth developing and this development is tough and there are no easy knee jerk ways to get it done.

This article was originally written by Scott Kurnit and Fred Wilson on April 16, 2012 here.