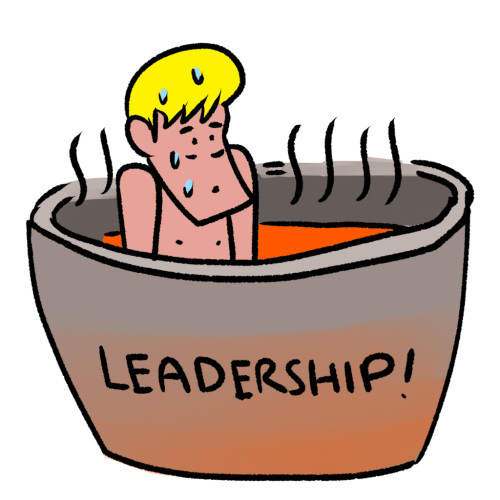 Back when I started this series, I outlined it and decided that I would ask Jerry Colonna to wrap it up for us. Jerry, when he was my co-founder at Flatiron, taught me the people side of the venture capital business. And now as CEO coach to a number of USV portfolio CEOs (and many others), he is teaching the people side of the startup business to some of the best entrepreneurs we work with. He is a people person through and through and management is all about people.

So with that forward, here is Jerry’s guest post. It is fantastic and he even threw in a section for Grimlock 🙂

The Crucible of Leadership

Work is difficulty and drama, a high-stakes game in which our identity, our self-esteem, and our ability to provide are mixed inside us in volatile, sometimes explosive ways… Work is where we can make ourselves; work is where we can break ourselves. David Whyte, Crossing The Unknown Sea: Work as a Pilgrimage of Identity.

Fred started this series inspired by Bijan who urged folks to “invest in your team, help them become better managers.” The topic, said Fred with his flair for understatement, “is very important.” Over the weeks, different people looked at the process of building the capacity to actually lead—putting the team in place, scaling people, everyone argued may be the hardest part of building the company.

To me, the hardest part of scaling people is learning to lead your self.

They often come to me, their coach, because they don’t have any place else to put the feelings. They’ll sit on my couch, or pace while they talk on the phone, pausing as we grapple with issue after issue after issue. The common denominator is always people. When I first take on a client I warn that I don’t have a magic wand. Nevertheless their wish for some elixir to mend their relationships is heart-breakingly visceral.

When they start, they often think the hardest part is figuring out what to do but they’re inevitably knocked on their ass by the task of leading.  And when they make mistakes–when they fail to lead–their identity, self-esteem, and ability to provide—as David Whyte notes–sometimes explode.

We all too often break ourselves in the work of becoming a CEO, a manager, a leader.

The only answer, the only balm against the inevitable existential pain of becoming the leader we were born to be is to see the lessons implicit in the practice of becoming.

“In the course of studying how geeks and geezers became leaders,” writes Warren Bennis in the introduction to his classic, On Becoming a Leader, “…I discovered that their leadership always emerged after some rite of passage, often a stressful one. We call the experience that produces leaders a crucible…the crucible is an essential element of the process of becoming a leader… Some magic takes place in the crucible of leadership… The individual brings certain attributes into the crucible and emerges with new, improved leadership skills. Whatever is thrown at them, leaders emerge from their crucibles stronger and unbroken.”

The magic, the alchemy, occurs when what we do mixes with who we are and is cooked by the heat of what we believe.

Take as an example a client I worked with intensely over the last few weeks. She and a co-founder have been killing each other (okay, I have a flair for the overstatement…still, they have both been getting sick with a host of ailments—migraines and stomach problems). The arguments had gotten so bad that neither could stand to be in the same room with the other. Even I was exasperated. During one late night call, I asked my client to forget, for a moment, whether her co-founder was right or wrong. “I don’t care who’s right,” I said with my voice rising. “The only thing we have to focus on is what are you supposed to be learning from this.”

There was a long silence. I thought, “Okay. You’ve really pushed her too far. You and your woo-woo ‘lessons in the pain’ crap.” But then: alchemy. She opened up. “This is really shameful to admit,” she began, “but I know I’m a pain in the ass because I have to be right, all the time. I know it’s wrong but I can’t stop myself.”

Over the next few weeks, on guard for her need to be right, we carefully went to work changing her approach to the co-founder. For her, the crucible moment came in facing her shame, acknowledging who she really has been and as a result she got to choose how she wanted to manage and who she wanted to be.

We forge our truest identity by facing our fears, our prejudices, our passions, and the source of our aggression.

The Buddhists teach that for the steadfast warrior to emerge, we’ve got to break open our hearts to what is.

Eat Me If You Wish

“One day,” begins a story re-told by Aura Glaser in the latest issue of Tricycle Magazine, “[the Buddhist saint] Milarepa left his cave to gather firewood, and when he returned he found that his cave had been taken over by demons. There were demons everywhere! His first thought upon seeing them was, ‘I have got to get rid of them!’ He lunges toward them, chasing after them, trying forcefully to get them out of his cave. But the demons are completely unfazed. In fact, the more he chases them, the more comfortable and settled-in they seem to be. Realizing that his efforts to run them out have failed miserably, Milarepa opts for a new approach and decides to teach them the dharma.

“If chasing them out won’t work, then maybe hearing the teachings will change their minds and get them to go. So he takes his seat and begins… After a while he looks around and realizes all the demons are still there… At this point Milarepa lets out a deep breath of surrender, knowing now that these demons will not be manipulated into leaving and that maybe he has something to learn from them. He looks deeply into the eyes of each demon and bows, saying, ‘It looks like we’re going to be here together. I open myself to whatever you have to teach me.’

“In that moment all the demons but one disappear. One huge and especially fierce demon, with flaring nostrils and dripping fangs, is still there. So Milarepa lets go even further. Stepping over to the largest demon, he offers himself completely, holding nothing back. ‘Eat me if you wish.’ He places his head in the demon’s mouth, and at that moment the largest demon bows low and dissolves into space.”

Surrendering to the demons that torment your organization does not mean abdicating your responsibilities to manage. You are still responsible for dealing with the reality of what is. In some cases, the demon is the wrong vision for the company. In others, it might be that you’ve hired the wrong people. In still others, it might be your own failings—like an inability to admit that you’re wrong.

But in all cases, allowing your self to be eaten by the demon that remains—acknowledging the ways you contribute to the problem without descending into pointless self-flagellation–adds to the heat beneath the crucible. Without heat, there is no alchemy.

On Becoming Your Self

When I was a young Padawan, I remember lamenting to my therapist about my own fears as a manager. After a series of infuriating questions, she got me to admit that I was trapped by my own beliefs about success. I finally admitted I would never be satisfied until I was as successful as Bill Gates.

Being myself was never good enough and, as a result, being comfortable in my own leadership was impossible.

It was only later, after allowing myself to bring forth what is in me, that I emerged not only as a leader but a Jedi master.

Joel Spolsky, in his guest post for this series, tackled what I hear all too often in my workshops. He takes the Steve Jobs Question head on.

“And yes, you’re right, Steve Jobs…was a dictatorial, autocratic asshole who ruled by fiat and fear.” But, importantly, he points out “you are not Steve Jobs.” Just like I am not Bill Gates.

Indeed, I think what Jesus taught was a simple truth: the only choice that doesn’t destroy you is to be the leader you were born to be. The alchemy of becoming your self is the ultimate act of leadership.

Listen close enough and you’ll hear echoes of this from every conceivable source.

Phil Sugar, tells us who he is and what he believes in the simple statement that, “My biggest legacy is the network of people I’ve hired and what they’ve gone on to do.”

Matt Blumberg, having gone through his own crucible challenged conventional wisdom (and the advice of Fred), choosing instead to invest in his team. “We consistently work at improving our management skills,” he notes adding that, “We learn from the successes and failures of others whenever possible.”

“Develop a philosophy of management. Write it down. Try it out on some folks whose wisdom you admire. Put it to work…” and, my favorite, “Live it.”

I read in all these thoughts a steady, consistent wisdom: the wisdom of knowing yourself, your own beliefs, and living them.

Enduring the alchemical crucible requires developing the capacity to reflect, to turn the pain of the everyday life as a leader into lessons. Every wisdom tradition I’ve ever encountered—from Fred’s blog to the words of sages—ultimately demands the same thing: we must go inward.

Joseph Campbell, writing in The Power of Myth, says,  “You must have a room, or a certain hour or so a day, where you don’t know what was in the newspapers that morning…a place where you can simply experience and bring forth what you are and what you might be.”

Call that room, at that hour, the crucible of leadership.

This article was originally written by Jerry Colonna and Fred Wilson on February 20, 2012 here.