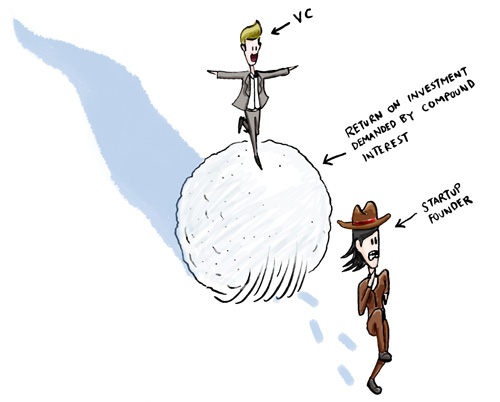 It’s time for MBA Mondays again. For the third week in a row, the topic of the post has been suggested by a reader. Last week, Elia Freedman wrote:

“A suggestion for your next post. The logical follow-on is to explain the second half of the TVM (time value of money), which is compounding interest.”

Before I address the issue of compounding interest, I’d like to recognize two things about the MBA Monday series. The first is that each post has a very rich comment thread attached to it. If you are seriously interested in learning this stuff, you would be well served to take the time to read the comments and the replies to them, including mine. The second is that the readers are building the curriculum for me. Each post has resulted in at least one suggestion for the next week’s post. I dove into MBA Mondays without thinking through the logical progression of topics. At this point, I’m just going to run with whatever people suggest and try to assemble it on the fly. It’s working well so far. So if you have a suggestion for next week’s topic, or any topic, please leave a comment.

Last week, I described interest as the rate of change in the time value of money. And we broke interest rates down into the real rate, the inflation factor, and the risk factor. And we calculated that if you invested $900 today at an 11.1% rate of interest, you’d end up with $1000 a year from now.

But what happens if you wait a few years to get your money back and receive annual interest payments along the way? Let’s say you invest the same $900, receive $100 each year for four years, and then in the last year, you receive $1000 (your $900 back plus the final year’s $100 interest payment).

There are two scenarios here and they depend on what you do with the annual interest payments.

In the first scenario, you pocket the cash and do something else with it. In that scenario, you will realize the 11.1% rate of interest that you would have realized had you taken the $1000 one year later. It’s basically the same deal, just with a longer time horizon. And your total proceeds on your $900 investment are $1400 (your $900 return of “principal” plus five $100 interest payments).

Let’s say you inherit $100,000 around the time you graduate from college. Instead of spending it on something, you decide to invest it for your retirement 45 years later. If you invest it at the 11.1% rate of interest that we’ve been using, the differences between pocketing the $11,100 you’d get each year and reinvesting it are HUGE.

You can see how this models out in this google spreadsheet (sheets two and three).

And during those seven to eight years, there are no annual interest payments. So when you calculate the rate of return on the investment, the spreadsheet looks like this. It’s a compound interest situation.

The differences are not as great over seven or eight years but they are made greater by virtue of the fact that VCs seek to make 40-50% annual rates of return on their capital. If you read last week’s post, you’ll know that comes from the risk factor involved. The more risk an investment has, the higher rate of return an investor will require on their money in a successful outcome.

The good news is that most venture capital investments are made over time, not all at once in the first year. So the “hold periods” on the later rounds are not as long and make this math a bit easier on everyone involved (maybe a topic for next week or some other time?).

But as you can see, compounding interest over any length of time increases significantly the amount of money you need to return in order to pay the same rate of return as a security with annual interest payments. There are two big takeaways here. The first is if you are an investor, you should reinvest your interest payments instead of spending them. It makes a huge difference on the outcome of your investment. The second is if you are an entrepreneur, you should take as little money as you can at the start and always understand that your investors are seeking a return and that the time value of money compounds and makes your job as the producer of that return particularly hard.

I love the ‘rule of 72’. It’s another way to think about compounding interest.

To me this helps explain how compounding interest makes a huge difference. A 7% annual return may not seem much…but most ppl don’t understand that that means you are doubling your money in a decade.

It is also useful in analyzing subscription businesses

This post was originally written by Fred Wilson on February 15, 2010 here.