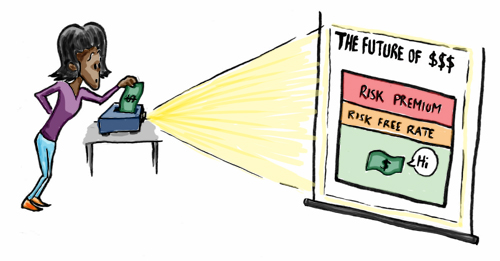 Last week, I posted about The Present Value Of Future Cash Flows and in the comments Pascal-Emmanuel Gobry wrote:

PEG is right. We have to talk about the Time Value Of Money and it was a mistake to dive into concepts like Present Value and Discount Rates before doing that. So we’ll hit the rewind button and go back to the start. Here it goes.

Money today is generally worth more than money tomorrow. As another commenter to last week’s post put it “you can’t buy beer tonight with next year’s earnings”. Money in your pocket, cash in hand, is worth more than cash that you don’t actually have in hand. If you think about it that simply, everyone can agree that they’d rather have the cash in hand than the promise of the same amount at some later day.

And interest rates are used to calculate exactly how much more the money is worth today than tomorrow. Let’s say that you’d take $900 today instead of $1000 exactly a year from now. That means you’d accept a 11.1% “discount rate” on that transaction. I calculated that as follows:

As you can tell from the way I talked about them, interest rates and discount rates are generally the same thing. There are technical differences, but both represent a rate of increase in the time value of money.

There are multiple reasons that money can be more valuable today than tomorrow. Let’s talk about two of them.

1) Inflation – This is a complicated topic that we are not going to get into in detail here. But I need to at least mention it. When prices of things rise faster than they should, we call that inflation. It can be caused by a number of things, most often when the supply of money is rising faster than is sustainable. But the important thing to note is that if a house that costs $100,000 today is going to cost $120,000 next year, that represents 20% inflation and you’d want to earn 20% on your money every year to compensate you for that inflation. You’d want a 20% interest rate on your cash to be compensated for that inflation.

2) Risk – If your money is in a federally guaranteed bank deposit for a year, you might accept 2% interest on it. If it is invested in your friend’s startup, you might want a double on your money in a year. Why the difference between a 2% interest rate and a 100% interest rate? Risk. You know you are getting the money in the bank back. You are pretty sure you aren’t getting the money back that you invested in your friend’s startup and want to get a lot back if it works out.

So let’s deconstruct interest rates a bit to parse these different reasons out of them.

Let’s say the current rate of interest on a one year treasury bill (a note sold by the US Gov’t that is federally guaranteed) is paying a rate of interest of 3%. That is an important rate to pay attention to. Because it is a one year interest rate on a risk free instrument (assuming that the US Gov’t is solvent and always will be). We will assume for now that is true. So the “risk free rate” is 3%. That is the rate that the “market” says we should be accepting for a one year instrument with no risk.

Now let’s take inflation into account. If the Consumer Price Index (the CPI) says that costs are rising 2.5% year over year, then we can say that the one year inflation rate is 2.5%. It can get a lot more complicated than this, but many real estate leases use the CPI so we can use it too. If you subtract the inflation rate from the risk free rate, you get something called the “real interest rate”. In our example, that would be 0.5% (3% minus 2.5%). And we call the 3% rate, the “nominal rate”.

Now let’s take risk into account. Let’s say you can find a corporate bond in the bond market that is coming due next year and will pay $1000 and it is trading for $900 right now. We know from the example that we started with that it is “paying” a discount rate of 11.1% for the next year. If we subtract the 3% risk free rate of interest from the 11.1%, we can determine that market is demanding a “risk premium” of 8.1% over the risk free rate for this bond. That means that not everyone thinks that this company is going to be able to pay back the bond in full, but most people do.

Ok, so hopefully you’ll see that interest rates and discount rates have components to them. In its simplest form, and interest rate is composed of the risk free rate plus an inflation premium plus a risk premium. In our examples, the risk free “real” interest rate is 0.5%, the inflation premium is 2.5%, and the risk premium on the corporate bond is 8.1%. Add all of those together, and you get the 11.1% rate that is the discount rate the corporate bond trades at in the markets.

Which leads me to my final point. Markets set rates. Banks don’t and governments don’t. Banks and governments certainly impact rates and governments can do a lot to impact rates and they do all the time. But at the end of the day it is you and me and it is the traders, both speculators and hedgers, who determine how much of a discount we’ll accept to get our money now and how much interest we’ll want to wait another year. It is the sum total of all of these transactions that create the market and the market sets rates and they change every second and always will (at least in a capitalist system).

That was tough to do in a blog post. It’s a very simple concept but very powerful and as Pascal-Emmanuel said, it is fundamental to all of finance. I hope I explained it well. It’s important to understand this one.

Regarding the time value of the money, not always $1 today is worth more than a $1 tomorrow. Deflation makes today’s dollars worth more as the prices of goods, services and assets decline. This is why the yield curve is inverted just before a recession – investors are discounting the expected negative economic growth.

Then you say that “you can’t buy beer today with tomorrow’s money”. Well, this is exactly what most people are doing by taking credit = they are borrowing from their future income in order to consume today.

yes, and if you use a negative inflation rate then you can get to a negative interest rate and then you have money today worth less than money tomorrow.

that’s why i added the word “generally” to my first statement on this topic.

This post was originally written by Fred Wilson on February 8, 2010 here.