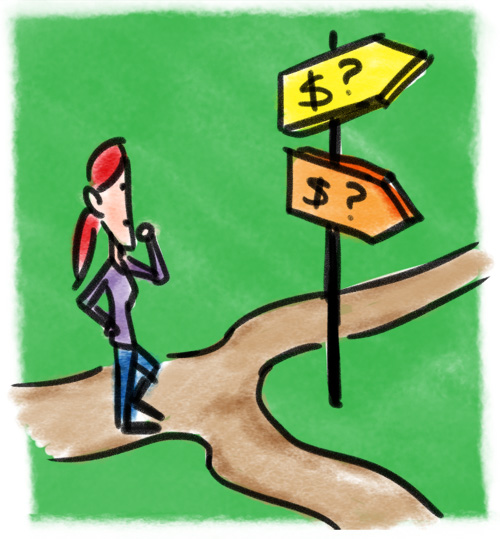 We are going to turn our attention on MBA Mondays to some costs that are important to recognize in business. First up is Opportunity Cost.

Opportunity Cost is the cost of not being able to do something because you are doing something else. These costs don’t end up on your income statement but they are expensive, particularly in a small business where you have very few resources.

Let’s use an example. Assume you have three software engineers on your team and you commit to building a new product that ties all three of them up completely for six months. Not only do you commit to build that product, but you sell it in advance and take a deposit from your customer to fund the development.  And then an even bigger opportunity comes your way. You have been invited to build a version of your product that will ship in a hot new device that a major computer company is making a big bet on. But you can’t take on that project because your team is tied up on the first project.

So the cost of the first project is not only the time and salaries of the three software engineers who are working on it. It is also the lost revenues and market share you might have gotten if you had been able to work on the partnership on the new device. That is your opportunity cost.

The problem with opportunity costs is that you can’t predict or measure them very well. They become painfully obvious in hindsight but not at the decision point when you need to know their magnitude.

So what do you do about opportunity costs that are out there but you can’t see or measure? That’s a tough one. I like what my friend Gretchen Rubin said on the subject:

I also try to ignore opportunity costs. I can become paralyzed
if I think that way too much. Someone once told me, of my alma mater,
“The curse of Yale Law School is to die with your options open” –
meaning, if you try to preserve every opportunity, you can’t move
forward.

So my advice is to understand the concept of opportunity costs, build them into you mental map, but don’t focus too much on them. If you can, try to build some flexibility into your organization so you aren’t completely resource constrained. That will reduce opportunity costs. But at the end of the day, you need to “move forward” in Gretchen’s words and that is first and foremost what all great entrepreneurs do.

I’ve found that most opportunities that seem really big to a startup but aren’t core to the focus and strategy tend to disappoint.

To ChiliSoft in 97, with just 3 employees, AT&T hosting sounded like a big deal in 1997; 10,000 hosted customers on Sun servers. It took 2 years to deploy our application server to their specifications. Revenue? Maybe 200k. Could it have been big? No. It was a credibility choice at a time we thought we needed it.

IBM sounded like a big deal, and it was: ultimately about $3 million to post ChiliSoft ASP over to the S390 and RS6000. But IBM customers? A few. So we spent management and dev time servicing a single customer to get the money and the logo. And I spent a half day in jail in 2002 for failing to pay a speeding ticket near Poughkeepsie in 1998 (my bad, but they impounded the car too!) on my way to Saratoga.

Avery Dennison for Mission Research? 18 months, flights, meetings, and even a deal. AD is in 45,000 retail stores. Distribution? Nothing. Revenue? Nada. Dev money? Nope. Chased a deal that seemed big.

Stick with your model as long as you think that’s what will ultimately work. Limit yourself to entertaining a few big deals, and don’t get swayed by the “logo” deal. If Google or Microsoft wants to include you in a press release as part of their dog and pony show, remember it’s their show, not yours–you’re just a way to show off how great they are, not to move you forward.

I’m an opportunist, like a lot of founders. Possibility is what drives us, and we rack up the opportunity costs because we almost always see the possibility.

This article was originally written by Fred Wilson on July 19, 2010 here.