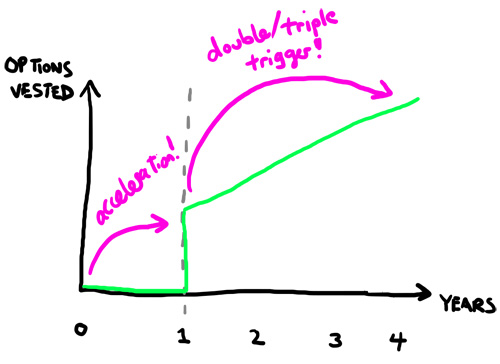 This MBA Mondays M&A case study is about the effect that stock option acceleration provisions have on M&A transactions. I am reblogging a blog post that Feedburner founder/CEO Dick Costolo (now Twitter CEO) wrote in the wake of the acquisition of Feedburner by Google. This post is still live on the web at its original location. While the names are fictional, the situations are not. It’s a really good read and addresses a whole host of issues that you will face as you think about stock option acceleration for your team.

——————
Question number 1 comes from an invisible Irish gentleman named Bernie in Wichita. Bernie writes, “Can you explain options acceleration? And when would I want to use it? And when wouldn’t I? And what’s single trigger vs. double trigger acceleration and how do you feel about those kinds of things?”

Those are great questions Bernie! Hopefully, I can at least get you to realize there’s a lot to think about here. Let’s dive right in.

Now let’s say you’ve got this classic vesting schedule and you hire somebody named Bobby Joe after you’ve been in business for one month, and he gets an options grant equal to 1% of the total outstanding shares. He works hard at your company for 11 months, after which your company is acquired for an ungodly sum of money. The acquirer decides that they were buying your company because of it’s cool logo and they don’t need any actual employees so they are all terminated effective immediately.

Bobby Joe’s options are worth how much? If you answered “Bubkas”, “Zero”, “nothing” or laughed at the question, you are correct. Although Bobby Joe has worked at the company for almost the entire life of the company, he gets nothing and the person that started 30 days before him gets 25% of their total options value. Doesn’t seem fair. Or as Bobby Joe would undoubtedly say “I’m upset, and I will exact my revenge on you at some later date in a compelling and thorough fashion”

Enter acceleration. Acceleration in an options plan can cause vesting to accelerate based on some event, such as an acquisition. For example, you might have a clause in your plan that states that 25% of all unvested options accelerate in the event the company is acquired.

If Bobby Joe had acceleration like this, he’s happier. He may still not be as happy as the person hired a month before him who also accelerates and now has 50% vested (the first year cliff and the extra 25% acceleration), but it sure feels a lot better to be Bobby Joe in this scenario.

We’ll start with full vs. partial acceleration. Full acceleration means that if the accelerating event happens, 100% of unvested options are vested and the employee is fully vested. If you started your job last Wednesday, the board approved your options grant on Thursday with full acceleration, and the company was acquired on Friday, congratulations, you just vested 100% of your options….you are just as vested as Schmucky in Biz Dev who was employee number 2 and started 3 years and 10 months ago (although shmucky may of course have a larger total number of options than you).

Ok so far? Good, we are coming to the fun part. Let’s say you bootstrap your startup that’s selling bootstraps on bootstrap.com for two years and then let’s say you have a 20% options pool that was created as part of an A round financing. Over the next 6 months you hire a whole bunch of people, you allocate 15 percent of the options pool, and an acquirer comes along. Do you think the shareholders (common and preferred) are going to be more excited about full acceleration or partial acceleration? Full acceleration dilutes the shareholders 15%, whereas partial acceleration only dilutes the shareholders…well, partially. As a variation on this example, let’s say you hired employee number 1 when you started bootstrapping and you allocate the same number of options to everybody. The guy who started last Tuesday is going to make just as much as employee number 1.

For these kinds of reasons, you will frequently see investors and others argue for partial acceleration. Options holders and those negotiating their employment of course prefer full acceleration. This can be the cause of lots of board arguments in the early going as you and your investors decide how acceleration will work in your company options plan (or with employees who want to negotiate additional acceleration on top of the existing plan). Hold this thought for a moment while we hop across town to learn about single trigger, double trigger, etc.

Now for the important piece of the conversation: What’s the best way to set up an options plan vis-à-vis acceleration? The idea behind double trigger acceleration is that as we saw in our bootstrap example, there are lots of interested parties that don’t particularly care for full single trigger acceleration. It is very employee friendly BUT not necessarily equitable and your investors will very likely raise their hands at every board meeting and ask if you’ve come to your senses yet if you’ve started your plan with full single trigger acceleration. We’ll see another reason to dislike it in a minute. So, along comes double trigger acceleration in which we seem to be creating a more ‘fair’ plan because partial acceleration makes the shareholders happy and the employees who’ve worked there for a couple years get a bigger piece than the guy who started Tuesday, while also providing additional consideration to any and all employees who aren’t offered jobs after the acquisition.

Here’s how I feel about all this, from number of options granted to acceleration: I’m for partial single trigger acceleration on acquisition (with no special exemptions for employees with super powers) AND an options grant program that objectively matches role and title to size of grant consistently across the organization. (eg, all senior engineers get 4 options, all executive team hires get eleventy-eleven options, you get the picture).

Why? Because any other approach misaligns interests and motivations. I know of one company (not one I started or worked for) that had full single trigger acceleration and the people at this company STILL hate the head of sales that got hired one month before an acquisition and made more than the hundreds of people who’d worked there for three years. Double trigger? Now you’ve got people who might WANT to get terminated if there’s an acquisition. Subjectively granting options quantities based on whatever the criteria of the day is? Always a bad idea and bound to end in tragedy and you regretting your whimsical approach to options grants.

So, at this point the astute reader thinks “this is all well and good, but you can just as easily have some employees who really take a bath if they’ve just left a very nice and respectable job to come work for you, then get terminated on acquisition a month later, and only get partial single trigger acceleration”. This is true. The answer is hey, they get partially accelerated, and I’d rather have generally equitable distribution of the deal. If you’ve got a reasonable Board of Directors, you can accommodate anomalies with performance bonuses or severance or whatnot instead of being locked into a plan with misaligned interests.

There’s another hidden issue with full single trigger acceleration that I mentioned earlier, and we can call this the “acquirer’s not stupid” rule. If your employees all fully vest on acquisition, how do you think the acquirer is feeling about your team’s general motivation level post-acquisition? They are not feeling good about it. No they are not. They are thinking “gee, we are going to have to re-incent all these folks and that’s going to cost a bunch of money, and you know where that money’s going to come from? I think we will just subtract it from the purchase price, that’s what we will do!”….so the shareholders get doubly-whacked…they get fully diluted to the total allocated options pool AND they likely take a hit on total consideration as the acquirer has to allocate value to re-upping the team.

My FeedBurner cofounders and I have done our options plans a bunch of different ways across a few different companies, even changing midstream once, and I think partial single trigger acceleration causes the least headaches for everybody involved in the equation (although it obviously provides less potential windfall for more recent hires).

NB: you should be very very clear when you hire people about how this works. Most employees, to say nothing of most founders, don’t really understand all the nuances in an options plan, and it’s always best to minimize surprises later on.

You want to sort as much of this out up front with your attorneys before you start hiring people. You want to avoid having “the old plan with X and the new plan with Y” and that sort of thing.

Thanks for the note, Bernie!

This article was originally written by Dick Costolo and Fred Wilson on January 24, 2011 here.