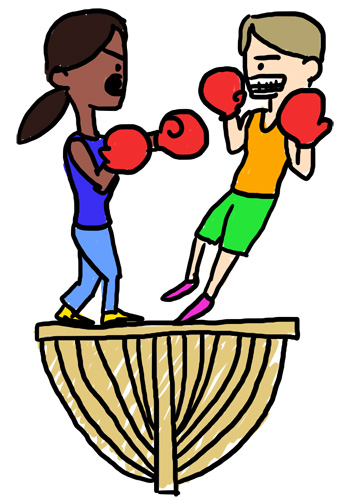 For the past month we’ve been doing M&A Case Studies on MBA Mondays. It’s time to go back to the basics of M&A. I laid them out in this post. For the next few weeks, I am going to discuss each of the key issues in detail. First up is the integration plan.

The integration plan is the way the buyer plans to operate your business post acquisition. You should get this figured out before you sign the Purchase Agreement. You are going to have to live with the results of the integration and you had better buy into it before you sign your company away to someone else.

And, of course, there are many variations along the spectrum between “leave it alone” and “totally subsume it.” In my opinion, consumer facing web services should largely be left alone in an integration. On the other hand, infrastructure, like Doubclick’s ad serving platform, is best tightly integrated.

I believe the buyer needs to keep the key people in an acquisition. Otherwise, why are you buying the company? So letting the key people parachute out at the signing seems like a really bad idea. That said, the buyer also needs to recognize that great entrepreneurs will not be happy in a big company for long. So most M&A deals include a one or two year stay package for the founder/founding team. That makes sense. That gives the buyer time to put a new team in place before the founding team leaves.

Generally speaking, I think it is a good idea for the key people to stay with the business post acquisition. This provides continuity and comfort in a tumultuous time for the company. However, I have seen situations where the key people went to other parts of the organization and provided value. Dick Costolo left Feedburner post acquisition by Google and focused on other key issues inside Google. Dave Morgan left TACODA and focused on strategic issues for AOL post the TACODA acquisition. This can work if there is a strong management team left in the acquired business post transaction.

Another key issue is how to manage conflicts between the acquired company and existing efforts inside the buyer’s organization. This happened in Yahoo’s acquisition of Delcious. Yahoo had a competing effort underway and they left it in place after acquiring Delicious. This resulted in a number of difficult product decisions and competing resources and a host of other issues. I think it was one of many reasons Delicious did not fare well under Yahoo’s ownership. You have the most leverage before you sign the Purchase Agreement so if you want the buyer to kill off competing projects, get that agreeed to before you sell. You may not be able to get it done after you sell.

These are some of the big issues you will face in an integration. There are plenty more. But this is a blog post and I like to keep them reasonably short. Take this part of the deal negotiation very seriously. Many entrepreneurs focus on the price and terms and don’t worry too much about what happens post closing. But then they regret it because they have to work in a bad situation for two years and worse they witness the company and team they built withering away inside the buyer’s organization and are powerless to do anything about it. It is a faustian bargain in many ways. But you don’t have to let it be that way. Get the integration plan right and you can have your cake and eat it too.

OK so i’ve spent cumulatively a bunch of years doing post-merger integration work. The one who gets left holding the bag after the transaction! (although I must say it is quite a lucrative consulting gig…a gift that keeps on giving)

A caveat is i’m talking about very large, complex organizations. In this case typically each side doesn’t even fully know what they have inside of themselves, let alone each other. Go talk to several dozen people in each organization and without fail there’s a sh*tload of meaningful stuff the leadership does not know about their company, let alone the other. And this is *after* due diligence.

The most popular bad ways to “integrate” that I’ve seen frequently are:

(1) the Noah’s Ark strategy (set up a leadership org structure where leaders from the legacy orgs are paired to run something. Recipe for them killing each other!)

A pretty bad but not terrible way is creating the new Org Chart and filling in the boxes. The problem with that is people get fixated on titles and empire-building, and not what the organization is really supposed to do. Org Charts don’t enable analysis of metrics, objectives around revenue growth and infrastructural consolidation — the stuff that’s supposed to drive the value in this integration.

The right way? A process model of the business from soup to nuts, defining the “right” future business: what are the differentiators that make it win in the market, how it delivers against them, what metrics do you use, and what skills/infr/tools it needs to do it (you will probably still find gaps).

This requires the guts + willingness to go into excruciating operational detail and make real, fact-based decisions. But it is the highest success and least painful way to move toward the best potential future.

It is exceedingly rare that a company does this. It is just too tempting to whip out the org chart. And the problem is, once you’ve whipped out the org chart, you can’t go back. Personal ambition is now in the way.

Don’t do it now and typically the next opportunity is at Turnaround Time. Same process! But now the focus is job cutting, which sucks. I wish they did it right during the happy time when the resources and positive vibe is there.

One of the most effective things you can do as a CEO is to make a formal welcome of a new acquisition. The staff is dealing with uncertainty and fear of the unknown. Or maybe not?

The more face time you can spend with the newly acquired staff immediately after the closing the easier it is going to be to evaporate the uncertainties and to quell fears.

I cannot overstate the importance of meeting with senior staff to, in effect, conduct a focus group with them individually — always individually first to keep them from forming a cabal or collective group think and sabotage the deal — and then as a group.

One of those people is going to know you, like you, appreciate you and that contagion will work to your benefit in the future.

I suggest the appointment of formal “Integration Managers” from the acquired team and the existing company. This creates a center of mass and an individual to whom the acquired folks can go to ask questions, vent or complain.

Depending on the size of the companies involved, I suggest a group meeting in which the CEO personally introduces the staffs to their counterparts with introductions which are personal and fun.

This will take some work on the part of the CEO but don’t be afraid to have notecards made and make a physical welcome — a handshake or a hug if you have that kind of mojo working . Get out of YOUR comfort zone.

I would also use the opportunity of an acquisition and integration to conduct a rigorous company survey to find out what the folks liked, disliked about the former company. Remember they will have almost complete license to share the “dreadfuls” with you because they may perceive their former bosses cannot fire them now.

Ask the big questions — what would you do if you were President/CEO. Once I did this and an accountant said to divest ourselves of a particular unit. The numbers were dreadful and she was working on their books. I had a blind spot. I got rid of the unit the next day.

Have a luncheon with prescribed seating so that folks have to meet their counterparts and let it run for the balance of the day. Get them all drunk — ooops, bad advice, disregard.

Immediately give them some new company doodah — caps, fleece jackets, t-shirts. Something that makes them move visually, physically and intellectually into the new company. Have their damn business cards done the first day. Burn the old ones — OK, a bit over the top, maybe but maybe not.

This article was originally written by Fred Wilson on January 31, 2011 here.