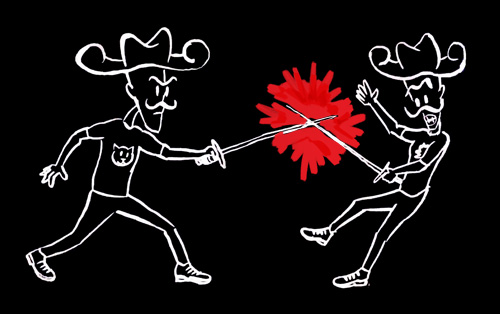 I was having breakfast with the CEO of one of our portfolio companies recently. And we were talking about how the sales team dislikes competition but the marketing team appreciates it. That gets to the heart of the pros and cons of competition. When your company is competing for a piece of business and you have a tough competitor in the mix, you can often lose the business. The sales team, who is compensated directly on revenues, hates that. But when your competitor spends heavily on marketing its offerings and identifying the pain point both your company and their company solve, that is good for you. It generates additional demand, and some of that demand will come your way. The marketing team, which is always trying to do more with less, loves that.

There are a number of good things about competition. As described above, competitors will invest in marketing and the combined marketing efforts of a number of competitors will accelerate the development of a nascent market. It is very hard to build a market all alone. Also, when a large company enters a market, it validates the market in the minds of many who had not been paying attention to it before. That means customers and also eventual acquirers of your company. And there is nothing quite like a competitor to fire up a team. I’ve seen many companies start to coast a bit after they have successfully taken control of a market. Then a pesky new competitor enters, takes some business from them, and then all of a sudden the team is fired up again. All in all, I’d rather see our portfolio companies have competitors than be the only participant in the market.

But competition is challenging. First, when you have strong competitors, you will lose business to them, often frequently. That increases sales costs, time to close, and makes it harder to grow rapidly. Competitors will also spread fear and doubt (FUD) in the marketplace. This is particularly galling. I’ve heard all kinds of crazy nonsense spread by competitors to our portfolio companies. Some of that “crazy nonsense” stuck around for a long time and hurt our portfolio company in the market. Competitors can also strike business deals with powerful allies and gatekeepers who can make it hard and at time impossible to enter certain parts of the market. Competitors are a pain in the rear and make operating a business harder in many ways.

Competitors will also impact your fundraising and exit plans. When you have a competitor that is raising capital, it will often cause an entrepreneur to think they need to raise capital to compete. I don’t think that is normally the case, but it is hard to convince an entrepreneur otherwise. That said, competitors will compete with you in the capital markets and the M&A markets. If an investor puts money into your competitor, most likely they will not invest in your company. If a big company buys your competitor, most likely they will not buy your company. This kind of competition is particularly anxiety infusing in the minds of entrepreneurs.

Very few companies will operate in a market for long without competition. Imitation is the greatest form of flattery. So be prepared for it. Make sure everyone on the team knows that competition is both good and bad. Sharpen your elbows and get ready to play tougher in the market. Get ready for cheap shots and lost opportunities. And make sure you draft on your competitors when you get that chance. And most importantly, make sure competition makes your company better. Because it should and that’s almost always a good thing.

One of the best things that ever happened to “my” company, ITXC, was our competitor iBasis. Just as you said, having another company in the field made it much easier to establish a market for an entirely new concept (in 1998), using the Internet for the middle of international phone-to-phone calls. In fact, the major telcos who were our wholesale customers would have been less likely to buy from us had there not been an alternate provider.

Their CEO and founder @ofergneezy and I shared a favorite joke. Two men in a tent hear a grizzly approaching. One starts to put on his running shoes. “You can’t outrun a bear,” the other says. “I only have to outrun you!” is the answer we lived by.

My worst business mistake was merging with a traditional telco rather than iBasis. More on that story at http://blog.tomevslin.com/2005….

This article was originally written by Fred Wilson on May 9, 2011 here.